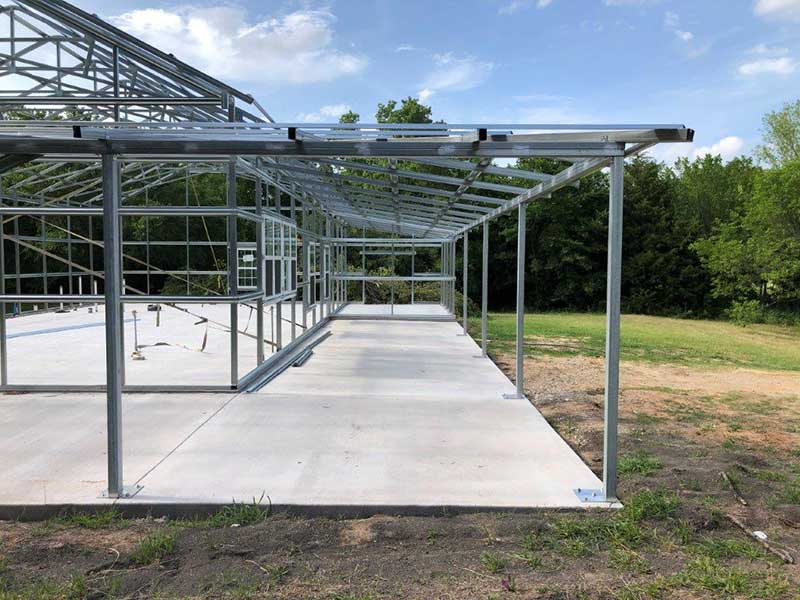 Amongst hurricane destruction, it’s common to see whole regions of rubble and debris. Now and then, a single home stands among the devastation. If you’re in construction, the first thing you might wonder is, “What did they do differently?”

After Hurricane Wilma, standing among the wreckage was an Absolute Steel metal carport. Since then, we’ve advertised our metal-framed buildings as tough enough to outlast hurricanes. Well, some folks are skeptical metal building kits can handle 120-mph sustained winds. And, in a way, they’re right, because surviving hurricanes is about more than the factory build. So, let’s talk about the science of how our buildings defy hurricanes.

Durability: Before & After the Factory

Ultimately, whether a building outlasts a hurricane comes down to a few factors. First, it’s about engineering. Second, it’s about the materials used. Then there’s the sheer velocity of the storm and how much force it packs when it reaches those buildings.

Absolute Steel builds structures to defy hurricane-force winds of 120+ miles an hour, but there’s only so much we control. After all, what happens in the factory is only half the story. Much of how well such buildings do in storms rests on the property owner’s shoulders, which we’ll address later.

Above: Partial view of plan set for building rated for the Florida Building Code 2017 and a wind speed rating of 140mph

Below: Close up image of wind rating language 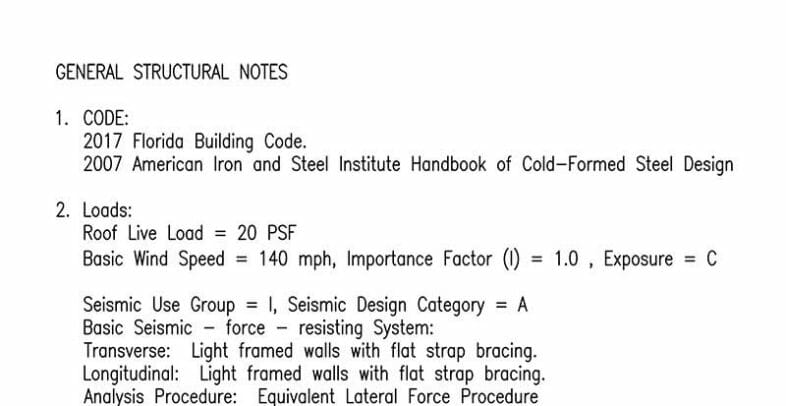 Understanding Hurricanes and Their Power

“Sustained” is the key word because it means the wind blows near that speed for the brunt of the storm. That “155 miles an hour” rating is not the storm’s top windspeed, but rather its average speed. Far stronger gusts can and do occur in each hurricane category.

So, that thing in the hurricane’s path doesn’t need to withstand a 150-mph gust. It needs to withstand hours of 125-mph gusts blasting it sideways. Like that surviving building in the Hurricane Wilma photo did.

It Starts with Groundwork

Physics and engineering dictate how best to build things, and why they do or don’t last. Consider a kitchen table as an example.

You can make the most formidable and indestructible tabletop ever, but if the legs wobble, it’s moot. If the legs are weak and don’t sustain the top plus a day’s grocery shopping, then that “tough top” doesn’t matter. The legs need to stand on a right angle, and they must be strong. Basic, right?

Hence why it’s so important to do the job right, start to finish, when installing any steel building kit. Factory-made 14- and 15-gauge steel beams are great, but they need anchoring to the ground.

This happens with “footings.” A footing is a section of concrete attached to the slab and building. It serves as the opposing, steadying force when storms rage. They root a building into the ground.

But does footing size matter? It sure does, and it depends on the conditions and climate in the build location. All these specifications are found in regional building codes. 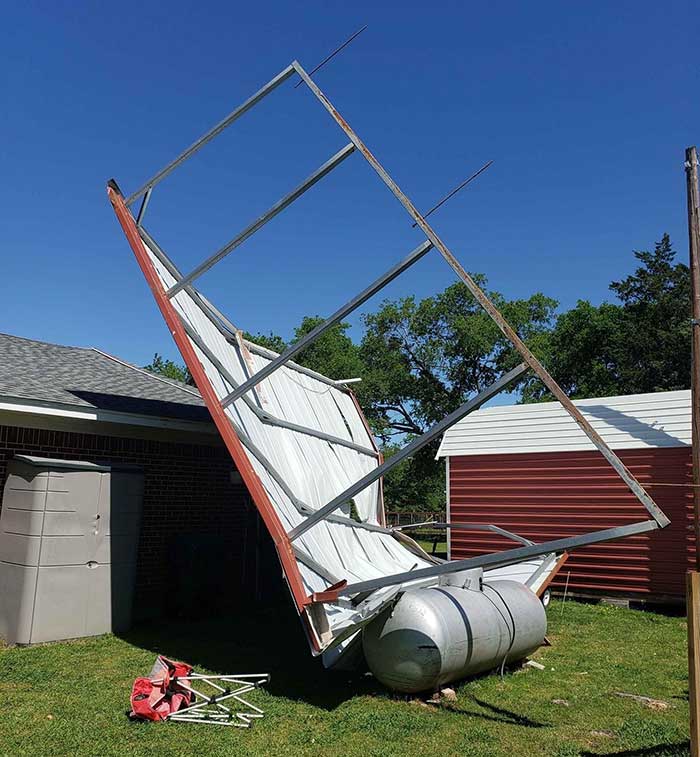 Who Decides Building Codes and Standards?

North American building codes frequently begin with ICC standards. The International Code Council, or the ICC, is a global body. They create engineering and construction standards and codes used around the globe. These standards exist to “ensure safe, affordable, and sustainable communities and buildings worldwide.”

So, storm-prone regions in America have local building codes suited to local conditions. These take wind and other forces into consideration when dictating footing specifications.

Think of concrete footings as being a counterweight. Whatever forces the structure endures above ground, footings counterbalance those forces below ground.

If footings are too small, they don’t offset windshear. But, big and deep, they keep a structure grounded.

So, there’s only so much factory engineers can do to make buildings safe for hurricanes. It’s proper footings that help buildings weather the toughest storms Mother Nature unleashes. 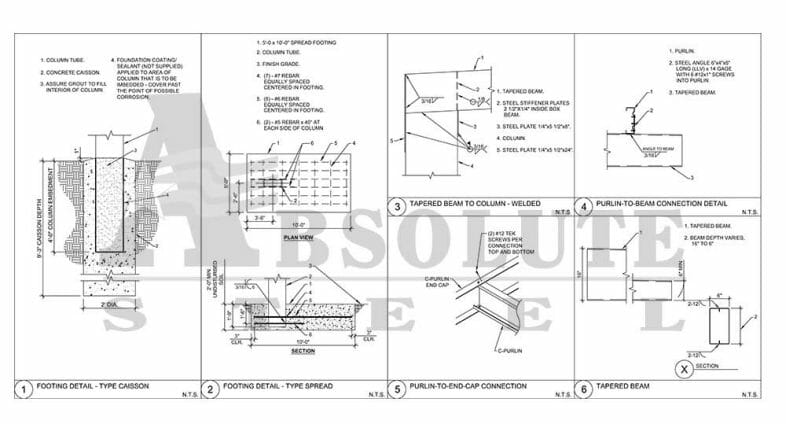 The Basics on Concrete Slab and Footings

In places with standard weather, concrete slab floors should be at least 4 inches thick. This means 2500 psi load-bearing strength. But usage changes the slab requirements too. If you’re parking large, heavy machinery and vehicles on the slab, it needs beefing up. The minimum thickness then is 6 inches with 4000-psi concrete. Rebar or fiber mesh reinforcement are often required as well.

The standard perimeter footings are 12 inches wide and 12 inches deep. These often get poured at the same time as the slab itself.

Pouring footings at the same time as the slab is a “monolithic pour.” Or an all-in-one pour. This means the whole slab and its footings are one piece, which can be great in hurricanes. Now that’s an anchor!

Yet this approach isn’t ideal for every scenario. For monolithic slabs, the property needs consistent compaction throughout the soil, plus level ground. If using dirt fill, the ground will be less compacted. This makes an all-in-one slab subject to cracking and failing in load-bearing areas. This can be the case in places with structures built on a flood table.

Installed in the wrong conditions, a monolithic slab can fail against hurricane-force winds.

Some regions, like parts of Florida, need what’s called a “stem-wall.” This uses a multi-stage installation. First, they pour footings, then they install concrete blocks as the stem-wall. Finally, a slab is then laid.

As you can see, footings and slabs are complex stuff. Depending where the building gets placed, requirements vary. Cold regions, softer soils, and hurricane-prone areas need deeper footings.

But even the right foundation doesn’t matter if there’s substandard steel fabrication.

Go to Part II – Not All Steel Frames Are Created Equal >>