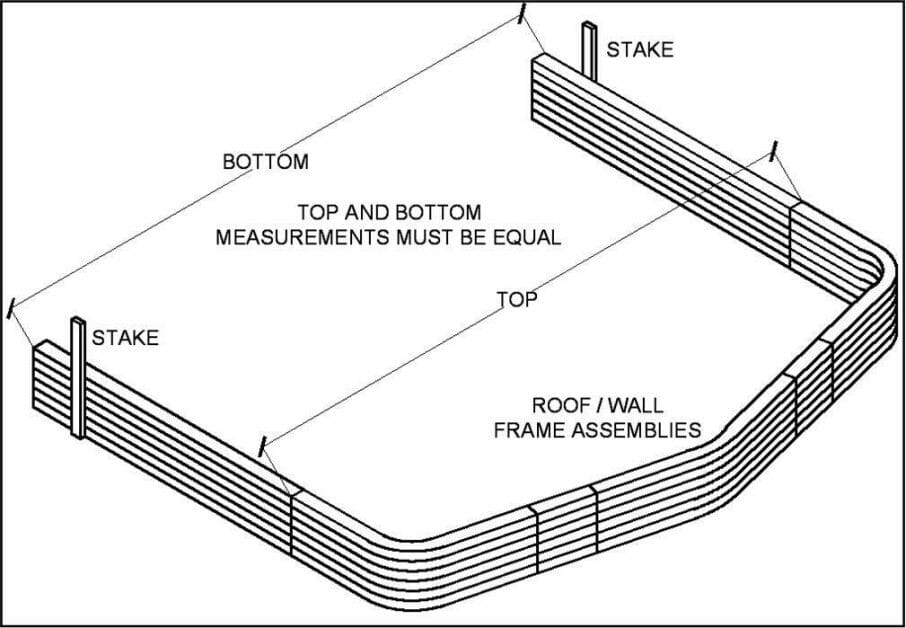 The following glossary is intended to help individuals understand common terms used by engineers in the building industry.

BASEPLATE – ground plate (base) used as a foundation
BATTEN – thin panel of solid material typically used in building construction for either structural support or cosmetic appearance
BAY – width of the distance between two columns
BEAM – creates a foundation in support of large structures
BEAM (CONTINUOUS) – a continuous beam rests on more than one support in a straight line
BEAM (SIMPLE) – simple beams are only supported at each end
BLANKET INSULATION – a rolled sheet of thermal insulation; possibly made of paper backing with a vapor barrier
BLIND RIVET – rivets that can be attached by a single workman from one side
BOCA – specifications, standards, and technical information for engineers; Building Officials Code Administrators
BRACKET – a structure shaped like an L with one arm supporting a shelf and the other arm fixed to a surface
BRIDGING – braces arranged to keep floor or roof in place
BUR (BUILT-UP-ROOF) – the acronym for a Built Up Roofing system, known for durability offering a choice of hot or cold application

CAMBER – used as a verb: a curve or a change in direction; used as a noun: slight arch of a curve going upwards
CLIP ANGLE – angle iron in short strips, used on structural elements for security at right angles
CLOSURE STRIP – stretchy material that seals gaps left on the roof edges; closure strips are intended to keep rain, birds, and insects out of the gaps as well as stop wind and problems weather can cause
COLLECTOR BOX – helps with the flow of water between a downspout and a gutter
COLUMN – supporting or decorative pillar
COMPRESSION – making a large thing small by pressing together
CONCENTRATED LOADS – a force that is insignificant because it is applied to a small section
CONDENSATION – change from liquid to solid or from gaseous to liquid; to make more concentrated
CURB – restrict or restrain

EAVE – Usually used in the plural; eaves are the hanging lower edge of a slanting roof
ELASTICITY – amount an object can stretch while keeping its original size and shape
EMBOSSING – embossing is typically used for sheet metal. The process raises designs in the sheet metal causing bulging to make certain design patterns
EXPANSION JOINT – connection that allows movement, absorbs vibration, or warming and cooling that causes structural damage

FACTORY MUTUAL ENGINEERING & RESEARCH CORP (FM) – property insurance company also known as “FM Global”. The insurer classifies roof construction on fire safety and wind resistance
FASCIA – a flat, broad surface on the outer edge of a building between the roof and ceiling
FLANGE – rim or edge that makes an object stronger to hold it I place or where it attaches to another object
FLASHING – use of materials such as sheet metal to cover joints and angles to protect against leaks
FOOTING – support or secure foundation
FOUNDATION – base support of a structure

GABLE – the part of a roof in the shape of a triangle that connects the edges of the roof’s slope
GAGE – (also spelled GAUGE) – device for measuring size, shape, or thickness of a metal object
GALVANIZED – coating a thin layer of zinc to make a metal more resistant and stronger
GALVALUME – specially coated sheet steel preferred for roofing over galvanized metal for corrosion resistance and long life
GIRDER – main horizontal beam used to support smaller beams
GIRT – large heavy beam that connects columns that support a frame

KIP – symbol of a unit of measure that equals 1000 lbs; kilopound. Term is a combination of the words kilo and pound; used to measure engineering loads
KNEE BRACE – diagonal brace that supports a beam or truss providing greater stiffness in the building frame

LINER – covering that protects studs, insulation and other interior parts
LIVE LOADS – opposite of a dead load, live loads are unstable and usually moveable

MANSARD – roof that slopes on all four sides
MEMBRANE – in the simplest terms, it is a very flexible and thin layer of material that divides certain areas from others, used as a filter, or other separator
MIL – a unit of length that is typically used to measure the diameter, or thickness of wire or materials sold in sheets. In most cases the thicker the material, the better the quality
MODULUS OF ELASTICITY – measures the stiffness a material can maintain under pressure before changing or warping
MOMENT – commonly called torque, which is a twisting force that turns an item
MOMENT of INERTIA – measures the resistance to change in an object’s rotation rate

PARAPET – protective wall that extends above a roof and projecting out from the original structure
PERM – Unit of transmitted water vapor
PIER – any group of building material that supports a column
PILASTER – shallow, rectangular element that projects slightly from a wall. This piece is known to have a base and capital that looks like the formation of a column
POLE – Column or post supported by both concrete at the base
POST – supporting or decorative pillar, such as a column
PURLIN – components that lie horizontally and extend between rafters. These make beams that support the roof

RAFTERS – a sloping beam that supports a roof or purlins
RAKE – on a gable frame, a rake is the outer trim and finish at the intersection of the roof and the end wall
REACTIONS – Forces developed at a constrained end, or joint, as a reaction to resist the applied loads on a structure
REINFORCING STEEL – Steel rods added within concrete mix to increase its tensile strength
RELATIVE HUMIDITY – Ratio of current water vapor saturation to total water vapor saturation, in an air-vapor mixture.
RETROFIT – placing new roof or walls over an existing structure with deteriorated walls or roof
RIB – metal panel with a portion raised for stiff or structural straddling
RIDGE – Intersection at the peak of the truss where two planes of the roof come together
REVERSE COATING – Coating with the applicator roll revolving in a direction opposite to the direction of travel of the metal strip
RIGID CONNECTION – fixed support, capable of passing on forces and moments through the connection
RIGID FRAME – structure assembled so the joints are firmly fixed transmitting moment, while diminishing moment in other frame parts
ROLL FORMING – Machinery capable of shaping sheet metal by sequentially deforming around various rollers
ROOF PITCH – The angle between the roof plane and the horizon which indicates the steepness of a roof

SAG ROD — rods used on a roof to prevent sagging of steel joist used as a purlin or girt
SANDWICH PANEL — A panel assembly used as covering. It consists of insulating core material with interior and exterior metal skins
SEAM – The intersection between two separate sheets
SHEAR – When a bolt shears, it breaks. The break is known as shearing
SILL – A beam which supports and fastens studs, doors, and windows, and is typically located along the bottom surface
SKIRT BOARDS – Short panels, used as a covering along the base of a wall, also known as baseboards
SOFFIT – underside part of an architectural element such as a vault, arch, ceiling or beam
SPAN – The distance between supports in a structural component
SPANGLE – The result of the unrestricted growth of zinc crystals during normal solidification
SPECIFICATION – description of how a component is to be built, includes design loads, materials, and fabrication methods
SPLICE – A longitudinal connection between the parts of a continuous member
SQUARES – Roofing materials that measure 100 square feet
STANDING SEAM – sheets of lightweight metal that use corrosion-resistant zinc material as the outer layer of the roof
STRUT – support that goes along the length of two components keeping other components separate
STUDS – A wall stud is used in construction as a support to the wall covering. Studs are generally used to support vertical loads.
SWAY FRAMES — Light trusses used in secondary structural systems.

WALL, BEARING – wall that can support its own weight and a load
WALL, NON BEARING – wall that cannot support its own weight and a load
WASH COAT – a thin, almost clear sealer
WEB – a metal sheet that connects heavier parts of a structural element, such as flanges or ribs
WINDLOAD – force severe weather puts on a structure
WIND UPLIFT – force of wind a structure can manage; usually regarding how wind-resistant a roof is built