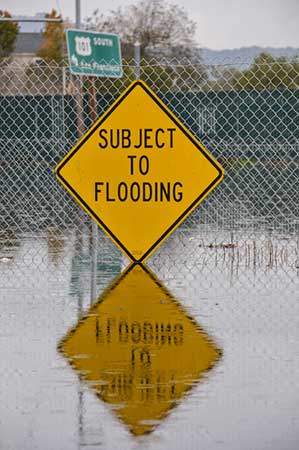 Thousands of homeowners have felt the effects of the recent floods in Texas. Record rains from Bristol to Dallas and Houston brought devastation to 70 counties.

Left in the aftermath of breached levees and gorged rivers are damaged homes and outbuildings. The federal disaster area declaration signed by the President will bring help in the form of funding for home repairs, a small but vital relief.

If you are cleaning up in the aftermath of the flood or live in a flood zone and are planning to build a home, you are probably wondering how to avoid damage from future floods. One option to consider is a metal building. This material offers a number of advantages over wood construction for homeowners in flood zones.

A Short History of Metal Buildings

Though popular in Japan since the 1950s, steel frame homes are quite new to the United States housing market. After World War II, Japan would have needed 150 years worth of timber growth to rebuild homes lost to bomb damage.

Builders turned to metal, which was available and had the major advantage of being fireproof. Using light-gauge steel that was made in the shape and size of lumber, contractors and homeowners built new homes. In the process, they developed a number of methods that made steel construction popular and affordable throughout the world.

Britain adopted steel for homes. Many of the top 20 companies building houses in that country currently use steel-frame construction. It is also a highly popular material for homes in Australia and Scandinavia.

In the U.S., steel has been used in offices and other commercial structures for years, but only in the past two decades have steel- and metal-frame homes become common.

With concern for the environment growing, they have become popular for their energy efficiency. Homeowners also like the fact that they are termite-proof and fire-resistant.

Here is an in-depth look at four major benefits of metal buildings to consider if you live in a flood plain.

According to the U.S. Centers for Disease Control and Prevention, mold can cause a wide range of health problems, some minor, others serious. These include: 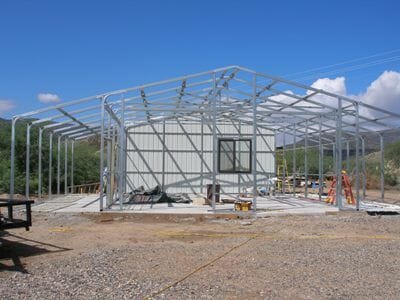 Mold is dangerous to your health. It thrives in areas with a high moisture content, which is a good description of a flooded home.

To get rid of it, you need to clean up the mold that is there and also fix the moisture problem so it won’t return. This is where metal shows its worth. Metal homes have a major advantage over wood structures because they don’t have wood studs, where mold thrives.

If you do get flooded and mold takes hold, you can remove it much more quickly in a metal home than in a wood one. Mold and mildew can be wiped from steel studs and panels quite easily. But if your home is made of wood, it can be difficult to get into wood panels and studs, which are porous and harbor mold.

Structures with metal roofs have become a popular replacement choice among homeowner because they are so effective in resisting damage from moisture. On the other hand, shingles and wood shakes crack and rip off, allowing moisture to leak into the substructure and into attics, causing costly damage and mold growth.

Mold can actually cause structure damage, compromising the integrity of a home. That possibility is eliminated with metal construction.

Metal corrodes, or breaks down, due to a normal electrochemical process. Corrosion speeds up in the presence of moisture and oxygen. But for home construction, two types of metal do well in resisting the effects of corrosion: galvanized steel and Cor-Ten steel.

Galvanized steel has a zinc coating that protects the metal from exposure to the elements. It is often used in rural settings and for residential construction.

Cor-Ten steel is actually an alloy that has as its base steel and copper, with a mix of chromium, manganese and nickel. Sometimes called weathering steel, it works well in weather extremes because the copper in the mix slows down the rate of corrosion.

Metal homes made with the right materials are effectively corrosion resistant. This means they can ride out a flood with minimal damage. 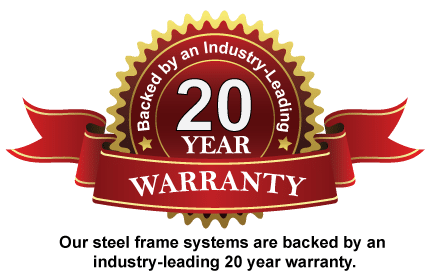 When a wood home gets flooded, its structural and framing materials can sustain significant damage. Water soaks in, weakens and rots the component parts of wood. In many cases these need to be replaced, which is time consuming and expensive.

But with a metal building, the frame and the panels don’t need replacing. Metal is not porous, so it doesn’t absorb the moisture. The material is not damaged and weakened. Even in a flood, metal doesn’t twist, warp or shrink, which are common problems with wood homes.

It should probably be stated though, that this claim is only in reference to flood waters – where the water recedes relatively quickly (within days or weeks).

The paint on steel panels is applied in such a way that it lasts almost as long as the metal, which in most cases is a lifetime. You don’t need to repaint metal panels after a flood because the paint is more than surface deep.

On the other hand, water seeps beneath the surface of homes made with the wood.  The material warps and rots, which damages the paint. After the wood is repaired or replaced, the structure needs to be repainted.

Metal homes require less time and money to bring them back to normal functioning and attractive looks after a flood. 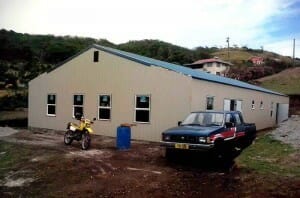 5. A Metal Building is Faster and Easier to Restore

Once the flood waters recede, restoration and repair begins on a flooded community.  In most cases of traditional wood homes, the restoration period is a long and arduous one.  Due to the issues stated above, it may be necessary to replace entire walls and in some cases a complete demolition of the structure is necessary, followed by a rebuilt. Of course this is time consuming and expensive.

Other than time and money, the mental toll is enormous. The time taken for a family to regain a normal life, or the time that a business is non-operational can be devastating.

Restoring a metal building that has survived a flood may entail replacing drywall, carpet, and maybe some lower cabinets.  However, in almost every case the structure itself will only need cleanup – not reconstruction.

Flood victims can go home, or go back to work much faster than they might with a wood structure.

Here’s an important tip to remember when building a metal home. You need to be sure to build on an elevated concrete pad, at least 18” above the natural grade, before pouring your concrete foundation. This keeps your structure above the water when it floods.  Learn more about the concrete foundation.

Metal homes are becoming more and more popular in flood zones for a reason. They resist the rotting and warping that happens to wood structures. They resist dangerous mold and mildew. Mold that does grow is easily cleaned out. Flooding causes minimal, if any, damage to metal and its paint.  Lastly, restoration and repair of a metal building is generally much quicker than that of a wood building, which enables us to quickly get back to a normal life after disaster.

A metal home stays in better shape when a flood hits, which saves you worry, money, time and effort.