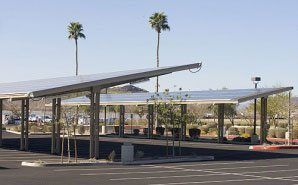 Did you know that most solar power is generated on those hot, sunny days when air conditioners push the power envelope and threaten to overload the power grid? When demand peaks, so does the production of solar energy, so solar panels actually reduce demand on power plant systems at the exact right time. Not only that, but solar panels cleanly and quietly produce power right where it is consumed, thereby preventing power delivery issues caused by overloaded transmission networks. 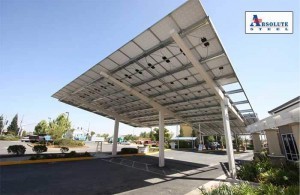 Solar panels have found a promising new home on canopies above the parking lots commonly adjacent to commercial and industrial buildings. And there, they not only produce needed clean energy, they also provide shade for parked cars and inhibit much of the nighttime “burn-off” caused by heat-retaining asphalt and thermal heat islands around our urban areas.

Parking lot shade canopies in asphalt rich urban areas are a natural location for situating solar power panels. The panels can easily be oriented to the sun, optimizing power production when it’s needed most. Google, Inc., as an example, has installed its own solar parking canopies that satisfy up to 30% of the electrical consumption at its headquarters in Mountain View, California.

Although solar carports can reduce peak power usage, they have been an overlooked resource largely due to poor planning and limited availability. The obstacle has been overcome in recent months as manufacturers gear up for pending “clean energy” regulations across the country. What can cities do to encourage the use of this natural setting for producing power? One option would be to incorporate solar parking structures into municipal building and zoning code requirements in their efforts to alleviate summertime burdens on the power grid. 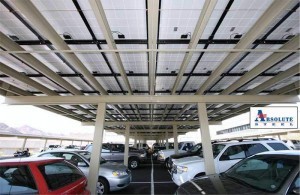 Most municipal zoning ordinances already require a minimum number of parking spaces in relation to the square footage of the building the lot is to service. They regulate the size of the parking spaces, the quantity of them, and the surrounding landscape. Why not require a minimum percentage of energy-producing covered spaces in order to mitigate the increased peak-hour electricity demand created by the new construction?

The legal basis for such a requirement is no different than the installation regulations for a parking lot in the first place – to mitigate impact. When a certain development increases the demand for already scarce energy during peak hours, the solar parking lot requirement would help ease this peak-hour demand. After all, the massive air conditioning units for most commercial and industrial complexes undoubtedly increase the risk of a power outage on scorching summer days, so it seems reasonable to have these developments mitigate this risk with clean energy-producing solar carports.

Is this burdensome to businesses or developers? Presently, the federal government and various state governments offer generous energy subsidies in the form of tax credits to energy-producing property owners and developers in an effort to reduce the installation costs of generating clean solar energy. Unfortunately, many existing homes and residential developments were placed on their lots without ideal solar exposure in mind. Very few rooftops are properly oriented to maximize solar resources and frequently, landscaping inhibits it further. When one considers that many parking lots at commercial developments often occupy more space than the buildings themselves, incorporating these areas into solar energy production would offer an economy of scales that would expand the production of the solar panels, thereby increasing their effectiveness and overall value. Solar parking lots on commercial developments would therefore make much more effective use of government subsidies.

The business benefits enjoyed directly by the commercial enterprise are not to be overlooked either. In fact, from a business standpoint alone, a solar parking system is a very compelling opportunity to increase business profitability. The importance of decreasing the business utility expense can not be denied. Today’s solar power improvements are not only accompanied by generous federal and state subsidies, but they also have the ability to seriously cut back power expenditures through utility company buybacks. Since the cost of energy during peak hours is far greater than what’s charged during off peak hours, it’s an ideal set of circumstances that allows the panels to produce energy exactly when it’s needed most. And while some might consider it a drawback that these panels produce energy only when the sun shines, this drawback is rendered insignificant by the fact that energy costs are substantially lower when the sun goes down. Moreover, new financing instruments called Power Purchase Agreements, or PPAs, allow property owners or users to control and stabilize power costs for up to 20 years with no upfront capital outlay or maintenance.

Businesses spend millions luring customers from of their competitors. If one had the choice between shopping at two local grocery stores and one offered energy-producing covered parking and the other offered only hot, black, asphalt, which one would the customer likely choose? The answer is obvious. And that the store has offset its energy expense by way of its own self-sufficiency while giving the customer an added perk, only speaks well of its progressive planning and consideration for the customer. Going green has never been more forward thinking in this age of energy independence. It’s a known fact that community good will and a company’s image, while intangible assets, make a very real difference to the bottom-line. A business that does its part to ensure we have clean energy and reduced dependence on foreign oil earns high marks in the community. Expansive parking lots without solar panels could begin to look antiquated, unappealing, and even antisocial.

And from a municipal point of view there’s an even more compelling reason to require solar powered parking lots and that’s because they provide a decentralized source of backup electricity in the event of a natural disaster or a terrorist attack. Adding a solar requirement for all new commercial parking structures is the right thing to do in any city and should be done. It gives us clean, renewable energy and less dependence on foreign oil. We shouldn’t delay. Why wait for the next spike in foreign energy prices to hold us hostage? Does anyone think it won’t happen again?